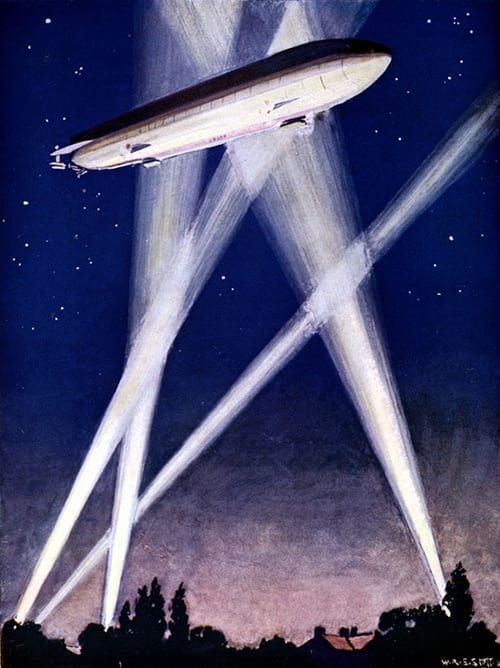 The Zeppelin raids on Great Yarmouth with Steve Smith  – 19th May

During WW1, Great Yarmouth was the first British town to experience the horror of civilian fatalities during an aerial bombardment.

On the morning of 19 January 1915, 2 German Zeppelin airships, the L3 and L4, took off from Fuhlsbüttel in Hamburg, Germany. The airships had been heading for the Humber, but bad weather led them to reroute and discharge their bombs over Norfolk.

The Zeppelin airships crossed the Norfolk coastline at about 8.30pm. The L3, captained by Captain Lieutenant Johann Fritz, then turned south east, towards Great Yarmouth, and the L4, under the command of Kapitanleutnant Count Magnus von Platen-Hallermund, turned north west, towards King’s Lynn.

After dropping parachute flares between the coastal villages of Happisburgh and Winterton to assist navigation, and incendiary bombs with no fatalities caused, the Zeppelin L3 dropped bombs on the working-class district of St Peters Plain in Great Yarmouth.

The bombing’s 2 fatalities were killed instantly. Samuel Smith, a 53-year-old shoemaker, was the first British civilian to be killed by aerial bombardment. He was said to be standing in the road when the bomb dropped. Martha Taylor, 72, lived at 22 St Peter’s Plain, and was next to be killed in the attack. A blue plaque, unveiled in 2012, stands in their memory on St Peter’s Plain.

Our guide Steve Smith will show you these sights and talk you through the route of L3. Along the way Steve will be pointing out sights of German raids during World War 2.

Our guide Steve Smith will show you these sights and talk you through the route of L3. Along the way Steve will be pointing out sights of German raids during World War 2.

Lunch at the Star Hotel

Option to visit the Time and Tide Museum

Time & Tide in Great Yarmouth is set in one of the UK’s best preserved Victorian Herring curing works, and tells the story of Great Yarmouth from its ice age origins to the present day.

Experience the heady atmosphere of a 1950’s fish wharf and take the wheel of a steam drifter. Hear gripping tales of wreck and rescue and meet some of the colourful characters who made their living from the sea.